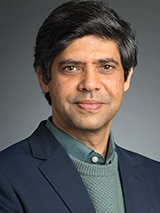 “ Music always has been, and always will be, part of the human condition.”

Dr. Aniruddh D. Patel is a Professor of Psychology at Tufts University. He received his Ph.D. in Organismic and Evolutionary Biology from Harvard University, where he studied with Edward O. Wilson and Evan Balaban. His research focuses on the cognitive neuroscience of music. Prior to arriving at Tufts, Professor Patel was the Esther J. Burnham Senior Fellow at The Neurosciences Institute, a scientific research organization founded by the late Nobel laureate Gerald M. Edelman. Professor Patel is the author of Music, Language, and the Brain, which won a Deems Taylor Award from the American Society of Composers, Authors and Publishers (ASCAP) in 2008. In 2009, he received the Music Has Power Award from the Institute for Music and Neurologic Function in New York City. Between 2009 and 2011, Professor Patel served as President of the Society for Music Perception and Cognition. He is an active speaker, having given many popular talks as well as scientific lectures. A major contributor to his field, his research has been reported in such publications as The New York Times, New Scientist, and Discover magazine and on National Public Radio. He has appeared in science documentaries, including The Music Instinct, which aired on PBS.