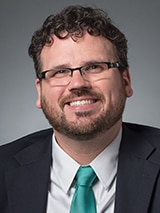 “ Sacred music is an immense topic. Nearly every culture across the globe includes music for their religious rituals.”

Charles Edward McGuire is Professor of Musicology at the Oberlin College Conservatory of Music, where he has taught since 2001. He earned a B.Mus. in musicology from the Oberlin Conservatory and a B.A. from Oberlin College with high honors in history, and received his A.M. and Ph.D. in music from Harvard University. At Oberlin, Professor McGuire teaches music history, including courses on 19th-century music, Ludwig van Beethoven, Mozart ‘s operas, the symphony in the 19th century, music and narrative, film music history, music in London, and romanticism and medievalism in 19th-century London. Professor McGuire has published extensively on British music, including studies of compositions by Edward Elgar and Ralph Vaughan Williams, as well as works on musical festivals. He is the author of the monographs Music and Victorian Philanthropy: The Tonic Sol-fa Movement; Elgar ‘s Oratorios: The Creation of an Epic Narrative; and The Historical Dictionary of English Music, which he co-authored with Oberlin colleague Professor Steven Plank. He has presented papers at numerous international musicological conferences, and is a frequent invited speaker for panel discussions and pre-concert talks. Professor McGuire has received a Teaching Excellence Award at Oberlin, as well as being a three-time winner of a Certificate of Distinction in Teaching from Harvard University.