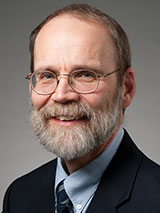 “What I enjoy most is inviting people into a process of discovery. Asking good questions is central. Questions open paths to explore and enable people with differing views to engage the Christian tradition in meaningful ways.”

Dr. Craig R. Koester is the Asher O. and Carrie Nasby Professor of New Testament at Luther Seminary. He attended St. Olaf College and Luther Seminary, then earned his Ph.D. from Union Theological Seminary in New York before returning to Luther Seminary to teach. He has been a visiting professor at the University of Pretoria in South Africa, a scholar-in-residence at the Center of Theological Inquiry in Princeton, New Jersey, and a guest lecturer at universities in Europe and the United States. Professor Koester has written numerous articles and essays as well as the popular work Revelation and the End of All Things. He is also completing a major commentary on Revelation for Yale University Press, and he translated Revelation for the Common English Bible. Among his other writings are a landmark commentary on Hebrews and Word of Life: A Theology of John's Gospel. Professor Koester is known for interweaving the study of biblical texts with their impact on art, literature, and music. A frequent presenter at conferences in the United States and Europe, he has also appeared in series for popular audiences, such as The Life of Apostle Paul with travel writer Rick Steves.