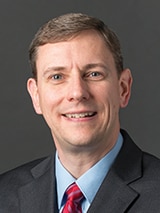 “ It has been the constant of trying to break the bonds of Earth that has fueled our efforts to engage in flight.”

James W. Gregory is Professor of Mechanical and Aerospace Engineering at The Ohio State University. He received a bachelor of science degree in Aerospace Engineering from Georgia Tech and a doctorate in Aeronautics and Astronautics from Purdue University. He is also an instrument-rated private pilot with more than 200 hours of flight time in gliders and single- and multi-engine aircraft. Prior to his arrival at Ohio State in 2008, Dr. Gregory’s work experience included stints at Delta Air Lines, NASA’s Glenn Research Center, and Tohoku University in Japan. He also served as a policy fellow at the National Academy of Engineering, he completed a postdoctoral fellowship at the United States Air Force Academy, and he held a summer faculty fellowship at the Air Force Research Laboratory Air Vehicles Directorate. Dr. Gregory’s innovative teaching has earned him Ohio State’s David C. McCarthy Engineering Teaching Award and the Department of Mechanical and Aerospace Engineering Outstanding Professor Award, as well as the SAE Ralph R. Teetor Educational Award. In 2014–2015, he was honored as a Fulbright Scholar at the Israel Institute of Technology (Technion) in Haifa, Israel. Dr. Gregory’s research has been funded by more than $10 million from industry and government, and has resulted in more than 100 publications. He is currently completing a book on the flight testing of light aircraft and unmanned aerial vehicles.