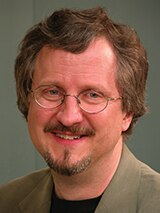 “ It’s almost 75 years later, and we find ourselves in much the same position as Wells described in 1929. Our knowledge of biology has exploded in recent years and it continues to expand exponentially.”

Dr. Stephen Nowicki is Bass Fellow and Professor of Biology at Duke University. He is also Dean and Vice Provost of Undergraduate Education at Duke, and holds appointments in the Department of Psychological and Brain Sciences and in the Neurobiology Department at Duke University Medical Center. Prior to taking his position at Duke, he was a post-doctoral fellow and assistant professor at The Rockefeller University. Professor Nowicki earned his undergraduate degree and a master's degree at Tufts University, and his Ph.D. from Cornell University. He is the recipient of the Robert B. Cox Distinguished Teaching Award from Duke University. He has been awarded fellowships from the Mary Flagler Cary Charitable Trust, the Alfred P. Sloan Foundation, and the John Simon Guggenheim Foundation. Professor Nowicki has published more than 65 scholarly articles in academic journals and is coauthor of the book The Evolution of Animal/Communication: Reliability and Deceit in Signaling Systems.