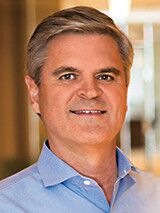 ““There’s a global transformation coming. And it’s going to upend the economy. … It represents both a great opportunity and an extraordinary risk for the United States. Our entire economic future is at stake. I call this transformation the ‘Third Wave.’””

Steve Case is one of America’s best-known and most accomplished entrepreneurs and a pioneer in making the Internet a part of everyday life. He is also the author of the New York Times best-selling book The Third Wave: An Entrepreneur’s Vision of the Future. In 1985, Mr. Case cofounded America Online (AOL), which became the world’s largest and most valuable Internet company. In 2000, he negotiated one of the largest mergers in business history, bringing together AOL and Time Warner. Today, in his role at Revolution, a Washington DC–based investment firm he cofounded in 2005, Mr. Case partners with visionary entrepreneurs to launch significant built-to-last new businesses. He is also chairman of the Case Foundation, which he established with his wife, Jean, in 1997.