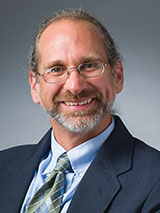 “Scientists give us new accounts of how the universe works, and philosophers unpack those theories to see what they tell us about what is real.”

Professor Steven Gimbel holds the Edwin T. Johnson and Cynthia Shearer Johnson Distinguished Teaching Chair in the Humanities at Gettysburg College in Pennsylvania, where he also serves as Chair of the Philosophy Department. He received his bachelor's degree in Physics and Philosophy from the University of Maryland, Baltimore County, and his doctoral degree in Philosophy from the Johns Hopkins University, where he wrote his dissertation on interpretations and the philosophical ramifications of relativity theory. At Gettysburg, he has been honored with the Luther W. and Bernice L. Thompson Distinguished Teaching Award. Professor Gimbel’s research focuses on the philosophy of science, particularly the nature of scientific reasoning and the ways that science and culture interact. He has published many scholarly articles and four books, including Einstein’s Jewish Science: Physics at the Intersection of Politics and Religion; and Einstein: His Space and Times. His books have been highly praised in periodicals such as The New York Review of Books, Physics Today, and The New York Times, which applauded his skill as “an engaging writer…[taking] readers on enlightening excursions…wherever his curiosity leads.”