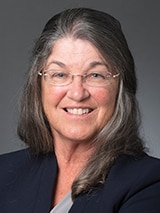 “We humans do not walk lightly. We leave our imprint as we go, and I want to show you how each group has left its mark on Spain.”

Joyce E. Salisbury is Professor Emerita of Humanistic Studies at the University of Wisconsin–Green Bay, where she taught history and served as associate dean of Liberal Arts and Sciences and director of International Education. She earned her Ph.D. in Medieval History at Rutgers University, specializing in religious and social history. Professor Salisbury began her career performing research in Spain, and she has continued to travel there to conduct further research, lecture, and guide students and other travelers. She is currently working on a book about the history of early Christian martyrdom. In addition to receiving the University of Wisconsin’s Outstanding Teaching award, she was named Professor of the Year in 1991 by the Council for Advancement and Support of Education. She has taught three times on Semester at Sea, a study-abroad program on a ship that circumnavigates the world with more than 500 students for a full semester. Professor Salisbury is a prolific author whose books include the award-winning Perpetua’s Passion: Death and Memory of a Young Roman Woman; The Beast Within: Animals in the Middle Ages; Rome’s Christian Empress: Galla Placidia Rules at the Twilight of the Empire; and the widely used textbook The West in the World. She has been interviewed many times on National Public Radio on topics from religion to the books she has written, and she appeared on the PBS special The Road from Christ to Constantine.