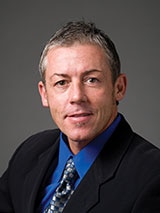 “Teaching people how the body works and how exercise can be of benefit is my mission in life, hence I'm so grateful for the opportunity to work with The Great Courses.”

International fitness expert Dean Hodgkin has presented master classes and seminars to fitness instructors in more than 30 countries. Voted Best International Fitness Presenter at the One Body One World awards in New York, he has appeared on numerous television and radio programs worldwide. A three-time World Karate Champion and a two-time European Karate Champion, Hodgkin earned a B.Sc. honors degree in Mathematics and Management Studies from the University of Portsmouth. He continued his education at Leicester College, where he was awarded the Certificate in Exercise and Health Studies by the Physical Education Association of Great Britain and Northern Ireland, the leading qualification in the field at the time. Since then he has accrued a wide and impressive array of vocational qualifications and is a regular attendee at conferences focused on the latest health and fitness research findings. At the 2012 International Fitness Showcase-Europe's largest group exercise event, attracting more than 7,000 participants-Hodgkin received a Lifetime Achievement Award for his services to the fitness industry.