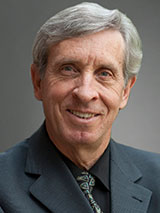 “It is impossible to understand the broader sweep of the United States history, without coming to terms with the Civil War, its antecedents, and its seismic consequences.”

Dr. Gary W. Gallagher is the John L. Nau III Professor in the History of the American Civil War at the University of Virginia. He graduated from Adams State College of Colorado and earned his M.A. and Ph.D. in History from The University of Texas at Austin. Prior to teaching at UVA, he was Professor of History at The Pennsylvania State University. Professor Gallagher is one of the leading historians of the Civil War. His books include The Confederate War, Lee and His Generals in War and Memory, and Stephen Dodson Ramseur: Lee's Gallant General. He has coauthored and edited several works on individual battles and campaigns and has published over 100 articles in scholarly journals and popular historical magazines. Professor Gallagher has received many awards for his research and writing, including the Laney Prize for the best book on the Civil War, the William Woods Hassler Award for contributions to Civil War studies, the Lincoln Prize, and the Fletcher Pratt Award for the best nonfiction book on the Civil War. Professor Gallagher was founder and first president of the Association for the Preservation of Civil War Sites and has served on the Board of Directors of the Civil War Trust.