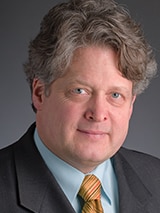 “The Latin language offers keys to more than most people can imagine…until they too learn Latin. I have devoted my life to helping others obtain the keys that they need to unlock the intellectual treasures that interest them most.”

Dr. Hans-Friedrich Mueller is the Thomas B. Lamont Professor of Ancient and Modern Literature at Union College in Schenectady, New York. He earned his M.A. in Latin from the University of Florida and his Ph.D. in Classical Philology from The University of North Carolina at Chapel Hill. Before coming to Union College, he taught at The Florida State University and the University of Florida. Professor Mueller won the American Philological Association's Award for Excellence in the Teaching of Classics at the College Level, as well as two awards for excellence in teaching at The Florida State University. At the University of Florida, he developed a graduate distance-learning program in classics for high school teachers. In addition to writing numerous articles, Professor Mueller is the author of Roman Religion in Valerius Maximus, the editor of an abridged edition of Gibbon's Decline and Fall of the Roman Empire, and the translator of Andreas Mehl's Roman Historiography: An Introduction to Its Basic Aspects and Development. He is also the author of Caesar: Selections from his Commentarii De Bello Gallico and coauthor of Caesar: A LEGAMUS Transitional Reader.