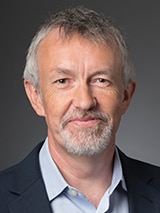 “ A fundamental contradiction lies at the heart of the CIA's existence. It's the tension between democracy and accountability on one hand, and the need for secrecy on the other to protect the government and its people.”

Hugh Wilford is a Professor of History at California State University, Long Beach (CSULB). He was born in the United Kingdom and graduated with a BA with honors in Modern History from the University of Bristol. Professor Wilford earned his PhD in American Studies from the University of Exeter. He began his career teaching US history in England at Middlesex University in London and the University of Sheffield. While still based in the UK, he received scholarships from the Fulbright Commission and the British government to teach and research in the United States, first at CSULB, then at the University of California, Santa Barbara, where he remains a Faculty Affiliate. At CSULB, Professor Wilford has received a President’s Award for Outstanding Faculty Achievement in teaching and research and the Distinguished Faculty Scholarly & Creative Achievement Award. He has also received awards from several other US institutions, including the National Endowment for the Humanities, the Princeton University Library, and the Gilder Lehrman Institute of American History. Professor Wilford has published extensively in the field of US history on such topics as the CIA, US–Middle East relations, Americanization and anti-Americanism in Europe, the American left, and US intellectuals. He is the author of many scholarly articles and papers as well as several books, including The Mighty Wurlitzer: How the CIA Played America; The CIA, the British Left and the Cold War: Calling the Tune?; and The New York Intellectuals: From Vanguard to Institution. Professor Wilford’s book America’s Great Game: The CIA’s Secret Arabists and the Shaping of the Modern Middle East won a gold medal in The Washington Institute for Near East Policy’s Book Prize competition. He is the coeditor, with Helen Laville, of The US Government, Citizen Groups and the Cold War: The State-Private Network. Professor Wilford’s work has been featured in numerous TV, radio, and newspaper interviews.