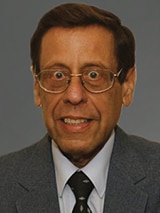 “ I've taught students about ancient Judaism for more than 40 years at the Hebrew University in Jerusalem.”

Dr. Isaiah M. Gafni is the Sol Rosenbloom Professor of Jewish History at The Hebrew University of Jerusalem, where he earned his Ph.D. and has taught for more than 40 years. He was formerly the Director of the Mandel Center of Jewish Studies at the university and also previously served as Director of Graduate Studies at the university's Rothberg International School. He has been a visiting professor at numerous American universities, including Harvard, Yale, and Brown. Professor Gafni has written extensively on a broad range of topics relating to the social, religious, and cultural history of the Jews in late antiquity, including more than 100 entries in the Encyclopaedia Judaica. Professor Gafni was honored as the Louis Jacobs Fellow in Rabbinic Thought at Oxford University in 1994 and received Hebrew University's Michael Milken Prize for exceptional teaching. Professor Gafni has written or edited more than 15 books on aspects of Jewish history, including Land, Center and Diaspora: Jewish Constructs in Late Antiquity. His book The Jews of Talmudic Babylonia: A Social and Cultural History was honored with the 1992 Holon Prize in Jewish Studies.