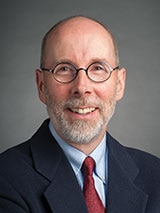 “The field of robotics offers an endlessly exciting way of seeing our world. Almost everything around you – any machine, any electronics component, any animal, anything that humans do – has potential implications for robotics, which has implications for you.”

Dr. John Long is a Professor of Biology and a Professor of Cognitive Science on the John Guy Vassar Chair of Natural History at Vassar College. He also serves as the Director of Vassar’s Interdisciplinary Robotics Research Laboratory, which he helped found in 2003. Professor Long received his Ph.D. in Zoology from Duke University. Internationally recognized for his work in biorobotics and evolutionary robotics, Professor Long creates autonomous robotic models of animals—both living and extinct—in order to study how the animals work, behave, and evolve. He also designs and builds bioinspired robots in collaboration with computer scientists, electrical engineers, mechanical engineers, physicists, and development-stage robotics companies. Professor Long’s research currently is funded by the National Science Foundation (NSF). He has received previous research funding awards from the NSF, the Office of Naval Research, the U.S. Small Business Administration, and the Defense Advanced Research Projects Agency. Professor Long is the author of Darwin’s Devices: What Evolving Robots Can Teach Us about the History of Life and the Future of Technology. He and his robots have been featured in the journal Science, in the international press; on numerous news programs; and in science documentaries, including Through the Wormhole, Evolve, and Predator X.