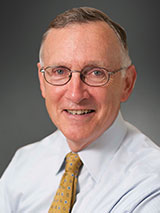 “When I made my course on Buddhism, I had no idea who would be listening my lectures. It has been immensely satisfying to see the course help so many people enjoy the variety, complexity, and depth of this beautiful tradition.”

Dr. Malcolm David Eckel is Professor of Religion and Director of the Core Curriculum at Boston University. He holds two bachelor's degrees, one in English from Harvard University and a second in Theology from Oxford University. Professor Eckel earned his master's degree in theology at Oxford University and his Ph.D. in the Study of Comparative Religion at Harvard University. He held teaching positions at Ohio Wesleyan University, Middlebury College in Vermont, and the Harvard Divinity School, where he served as acting director of the Center for the Study of World Religions. At Boston University, Professor Eckel teaches courses on Buddhism, comparative religion, and the religions of Asia. In 1998, Professor Eckel received the Metcalf Award for Teaching Excellence, the university's highest award for teaching. In addition to writing many articles, Professor Eckel has published two books on Buddhist philosophy: To See the Buddha: A Philosopher's Quest for the Meaning of Emptiness and Buddhism: Origins, Beliefs, Practices, Holy Texts, Sacred Places.