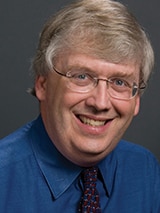 “My wife says that I am an evangelist, with economics as my religion. I’m not sure this is altogether a good thing! But maybe it explains my enthusiasm for prepping and giving these lectures. ”

Professor Timothy Taylor is Managing Editor of the prominent Journal of Economic Perspectives, published by the American Economic Association. He earned his Master's degree in Economics from Stanford University. Professor Taylor has won student-voted teaching awards for his Introductory Economics classes at Stanford University. At the University of Minnesota, he was named a Distinguished Lecturer by the Department of Economics and voted Teacher of the Year by the Master's degree students at the Hubert H. Humphrey Institute of Public Affairs. In 2007, Professor Taylor published the first Principles of Economics textbook, available as a free download from Freeload Press. He has also edited a wide range of books and reports and published articles on globalization, the new economy, and outsourcing. From 1989 to 1997, Professor Taylor wrote an economics opinion column for the San Jose Mercury-News.