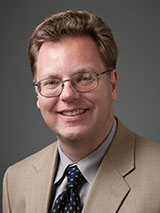 “Modernity is a notoriously slippery concept, because, obviously, what is modern now will soon become the past, as time marches relentlessly forward.”

Dr. Vejas Gabriel Liulevicius is Lindsay Young Professor of History and Director of the Center for the Study of War and Society at the University of Tennessee, Knoxville. He earned his B.A. from the University of Chicago and his Ph.D. from the University of Pennsylvania. After receiving his doctorate, Dr. Liulevicius served as a postdoctoral research fellow at the Hoover Institution on War, Revolution, and Peace at Stanford University. Professor Liulevicius has won many awards and honors, including the University of Tennessee's Excellence in Teaching Award and a National Endowment for the Humanities Fellowship. At the university he teaches courses on modern German history, Western civilization, European diplomatic history, Nazi Germany, World War I, war and culture, 20th-century Europe, nationalism, and utopian thought. Dr. Liulevicius has published numerous articles and two books: War Land on the Eastern Front: Culture, National Identity, and German Occupation in World War I and The German Myth of the East, 1800 to the Present.

Also By This Professor See all 7