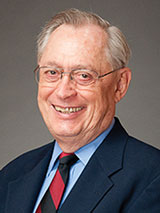 “Standards of beauty are seemingly endless and contradictory, which is why the rather hopeless phrase 'beauty is in the eye of the beholder' was coined.”

Professor William Kloss is an independent art historian and scholar who lectures and writes about a wide range of European and American art. He was educated at Oberlin College, where he earned a B.A. in English and an M.A. in Art History. He continued his postgraduate work on a teaching fellowship at the University of Michigan and was then awarded a Fulbright Fellowship for two years of study in Rome. As Assistant Professor of Art History at the University of Virginia, he taught 17th- and 18th-century European art and 19th-century French art. Professor Kloss has enjoyed a long association with the Smithsonian Institution, presenting more than 150 courses in the United States and abroad on subjects ranging from ancient Greek art to Impressionism to the works of Winslow Homer. He has also been a featured lecturer for the National Trust for Historic Preservation and for The Art Institute of Chicago. Professor Kloss serves on the Committee for the Preservation of the White House, a presidential appointment he has held since 1990. He is the author of several books, including Art in the White House: A Nation's Pride (2nd edition), which won the 2009 National Indie Excellence Award in the Art Category, as well as a 2009 USABookNews award for Best Book in Art. Most recently, he coauthored the United States Senate Catalogue of Fine Art. He also has written articles published in Winterthur Portfolio, The Magazine Antiques, American Arts Quarterly, and Antiques & Fine Art.