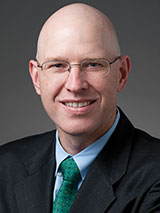 “I love that the The Great Courses gives me a chance I wouldn’t otherwise have to teach people who love to learn. I really enjoy the challenge of putting together courses that are engaging and useful! ”

Professor Connel Fullenkamp is Professor of the Practice and Director of Undergraduate Studies in the Department of Economics at Duke University. He teaches financial economics courses, such as corporate finance, as well as core courses, such as economic principles. In addition to teaching, he serves as a consultant for the Duke Center for International Development. Prior to joining the Duke faculty in 1999, Professor Fullenkamp was a faculty member in the Department of Finance within the Mendoza College of Business at the University of Notre Dame. Originally from Sioux Falls, South Dakota, Professor Fullenkamp earned his undergraduate degree in Economics from Michigan State University. In addition to receiving the Harry S. Truman Scholarship, he was named one of the university's Alumni Distinguished Scholars. He earned his master's and doctorate degrees in Economics from Harvard University, where he was also awarded a National Science Foundation Graduate Research Fellowship. Professor Fullenkamp's areas of interest include financial market development and regulation, economic policy, and immigrant remittances. His work has appeared in a number of prestigious academic journals, including the Review of Economic Dynamics, The Cato Journal, and the Journal of Banking and Finance. He also does consulting work for the IMF Institute at the International Monetary Fund, training government officials around the world. He is a member of the IMF Institute's finance team, whose purpose is to train central bankers and other officials in financial market regulation, focusing on derivatives and other new financial instruments. In recognition of his teaching excellence, Professor Fullenkamp has received Duke University's Alumni Distinguished Undergraduate Teaching Award as well as the University of Notre Dame's Mendoza College of Business Outstanding Teacher Award. Along with Sunil Sharma, Professor Fullenkamp won the third annual ICFR-Financial Times Research Prize for their paper on international financial regulation.

Also By This Professor See all 5